All natural populations are constantly subject to new mutations, and frequently face new environments, to which they adapt. Knowledge of the genetics of adaptation should provide the centre piece of a unified theory of evolution. Despite its extreme importance, the process of adaptation is far from being understood. How does the shape of the distribution of the fitness effects of mutations depend on the environment? What is the importance of epistasis in adaptive evolution? are still open questions. While empirical observations on advantageous mutations are extremely difficult, recent technical advances allow us to start tackling these questions with an unprecedented accuracy. We combine theoretical approaches and experimental evolution with bacteria which allows us to directly measure key parameters and to test theoretical predictions about the genetic basis of adaptive evolution in increasingly complex ecosystems. Our two main broad areas of research in the lab are Epistasis and Antibiotic Resistance and Adaptation Within Ecosystems.

Different studies have demonstrated that bacterial populations have an enormous potential to adapt to relatively simple and abiotic challenges in laboratory environments. On the other hand, far less is known on how biotic interactions shape adaptive evolution. In the lab we have been studying bacterial adaptation to important biotic interactions: (i) Adaptation within the mammalian gut; and (ii) Adaptation to cells of the immune system.

Evolution within the gut 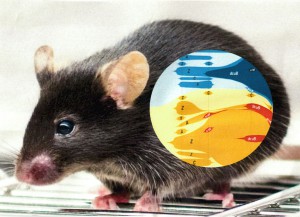 health status, with significant loss of species diversity typically observed in disease conditions. Within each microbial species a great deal of diversity is hidden and such intra-specific variation is also key to the proper homeostasis between the host and its microbial inhabitants. Indeed, it is at this level that new mechanisms of antibiotic resistance emerge and pathogenic characteristics evolve. Yet, our knowledge on intra-species variation in the gut is still limited and an understanding of the evolutionary mechanisms acting on it is extremely reduced. In this project we aim to determine the speed and mode of adaptation  of Escherichia coli to one of its main and medically most relevant natural environments: the mammalian gut. We study the adaptation of commensal E. coli to the mouse gut to unravel the dynamics of adaptation in this complex ecosystem. Importantly, using different strains of mice, we aim to understand what are the contributions of different aspects of the gut ecology (e.g. immunity, microbiota) to the adaptive process.

Antagonistic interactions are likely to be important determinants of the genetic/phenotypic diversity obser-ved in bacteria and the complexity of their genomes. An important trait, relevant for bacterial pathogenesis, is the ability to escape innate immunity. In this project we used a novel set up of experimental evolution in combination with phenotypic characterization, genome sequencing and mathematical modeling to address the question of how fast and through how many adaptive steps a commensal Escherichia coli acquires such a trait. We found that less than 500 generations are sufficient for E. coli to evolve clones able to better escape macrophage phagocytosis. Recent results show that under constant pressures from a key component of the host immune system commensal E. coli rapidly acquires pathoadaptive mutations that cause transcriptome changes associated to the host-microbe duet. Importantly, we have also recently shown that mutations conferring antibiotic resistance can decrease the fitness cost or even be beneficial within  macrophages, revealing a previously unknown interaction between antibiotics and the immune system. 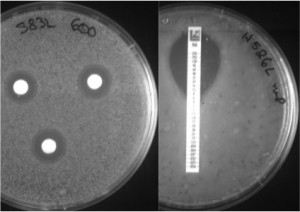 Even with the success of antibiotics, the rapid spread of multiple antibiotic resistances constitutes an increasing health problem. We are studying the importance of genetic interactions in the evolution of antibiotic resistance; in particular the costs of multiple resistance and the rate of compensatory adaptation. Evidence is mounting that epistasis is widespread among mutations. The cost of carrying two deleterious mutations, or the advantage of acquiring two beneficial alleles, is typically lower that the sum of their individual effects. Much less is known on epistasis between beneficial and deleterious mutations, even though this is key to the amount of genetichitchhiking that may occur during evolution. This is particularly important in the context of antibiotic resistance: Most resistances are deleterious, but some can be beneficial.

Antibiotics target essential cellular functions but bacteria can become resistant by acquiring either exogenous resistance genes or chromosomal mutations. Resistance mutations typically occur in genes encoding essential functions; these mutations are therefore generally detrimental in the absence of drugs. However, bacteria can reduce this handicap by acquiring additional mutations, known as compensatory mutations. Genetic interactions (epistasis) either with the background or between resistances (in multiresistant bacteria) dramatically affect the fitness cost of antibiotic resistance and its compensation, therefore shaping dissemination of antibiotic resistance mutations.

More info about the project consortium and funding of PREPARE